HomepageNewsMarintec China 2015 is getting bigger

Marintec China 2015 is getting bigger 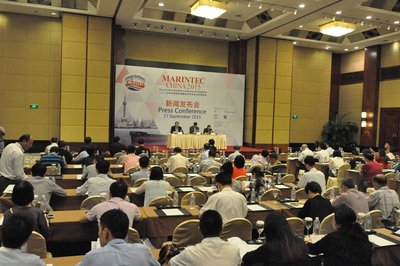 This year is the 18th edition of Marintec China, and true to the auspicious number '18' which means "to prosper", a record number of over 2,000 exhibiting companies and more than 60,000 visitors are expected this year.

In comparison, in 2013, over 1,700 exhibiting companies catered to 57,886 visitors from 88 countries and regions. Marintec China, which takes place every two years, has been breaking records year after year.

Of particular note, Hyundai Heavy Industries - Shipbuilding Division, one of the world's largest shipbuilders, is participating at Marintec China 2015, with plans to showcase its capabilities in Shipbuilding, Offshore & Engineering, and Green Energy. The well-known Hong Kong-listed COSCO International, engaged in ship trading agency services, marine insurance brokerage services and distribution of marine equipment and spare parts, will be a first-time exhibitor.

Several exhibitors have made Marintec China their "go to" event on their calendar for China. The repeat exhibitor rate is 70%.

Mr Andre Vrijsen, Area Manager of Royal IHC which was an exhibitor at the fair in 2013, said: "Marintec China gives us an idea of what is going on in China's marine market. This will be important for our future development."

In addition, the number of national and regional pavilions this year has grown to 17. The pavilions will showcase offerings from Austria, China, Denmark, Finland, Germany, Greece, Hong Kong SAR, Japan, Korea, the Netherlands, Norway, Panama, Singapore, Sweden, Taiwan region, the United States and the United Kingdom.

What is noteworthy is that the countries which will have their pavilions at Marintec China for the first time this year are the shipping nations of Greece and Panama. An additional Korea Pavilion is organised by Busan Marine Equipment.

Exhibitors will hail from more than 23 countries/regions.

To be held concurrently with the trade exhibition is the Senior Maritime Forum 2015, the theme of which is "Innovation Drives Development, the Green Agenda Guides the Future". This is a global conference attended by senior Chinese government officials, corporate leaders and high-level executives. It will be held on 30 November to 3 December at the Kerry Hotel Pudong in Shanghai.

China remains the world's biggest ship manufacturer. With the lion's share of their output targeted at the overseas market, Chinese shipbuilders keep tabs on the significant developments in international maritime that will affect how ships are constructed. Take ship emission standards for example. On 31 August 2015, the Ministry of Transport announced a special action plan under which China will establish emission control areas for ships and other waterborne vessels over 2015-2020. The plan sets out targets for ship and port pollution prevention and control, and covers coastal and inland river ports and docks, and shipyards. Ships have to meet the required standards by 2020. Ships which fail to meet the standards by the deadline will be made obsolete over time. For Chinese shipbuilders, this means that there will be growing demand for environmentally friendly vessels.

Thus, innovation and green technology form the key theme of our Senior Maritime Forum. This ties in with China's strategy to promote technological innovation in its shipbuilding industry. This includes investing more in environmental-friendly and energy-saving ship machinery. These developments spell tremendous opportunities for those involved in ship engineering, ship building, and ship technology, to name but a few areas.

The Forum will cover issues of the day revolving around Shipbuilding & Ocean Engineering; Shipping & Ports; Maritime Finance and Marine Technology.

To enhance connectivity, Marintec China is making available a real-time interactive mobile app to all participants. The app allows participants to:

One of the leading events for representatives of the yachting business and fans of water sports, the Moscow Boat Show 2020 will be held from March 5 to 9 at the Crocus Expo.

International Boat Show ADIBS 2019 is scheduled to take place at ADNEC Marina from 16 to 19 October. Exhibitors will bring latest in luxury yachting, as well as leisure marine, fishing and water sports equipment to ADNEC’s 31,000-square-metre marina.

From September 17 to September 20, one of the largest exhibitions of the Neva 2019 marine industry will be held in St. Petersburg.

The trade fair brought together around 50 000 industry visitors from more than 120 countries. Featuring a total of 2 289 exhibitors from 69 nations, and five accompanying conferences, SMM more than met the industry's high expectations, setting new standards for internationality and innovation.

Over 50938 experts receive our events announcments every Wednesday. Join them!